“Here, let me help. There is no way you can carry all these boxes in one trip. You’ll be going back and forth so many times, you won’t get any packing done.” James leaned over and grabbed the rest of the boxes in his hands and stood.

Avery bit her lip. It would save time, but how was she going to stop him from seeing her apartment?

“Come on be sensible. You know, you can’t possibly carry them all. Just let me help.  I promise not to bite. Well, until you want me to?” James said with a straight face. But the twinkle was apparent in his blue eyes as he looked down at her.

Avery knew she would seem unreasonable if she refused. This man wouldn’t understand her not wanting to show her dirty laundry. “OK, but just to the apartment building. I’ll take it from there.” Avery opened the door with two boxes in one hand and held the door open with the other for James. James, being a gentleman, shifted the boxes that he held to one arm and took the door from her.

Damn! Avery had been looking forward to watching that tight ass of his walking in front of her. Sighing Avery walked out in front of him. James was now able to appreciate her tight ass as she swayed in front of him, trying not to drop the boxes that she held.

Avery ended up walking in front of James all the way to her apartment. The sidewalk was narrow, with not enough room for them to walk side by side with the boxes they held. Avery tried to think of something to say to James.

James seemed to be on her wavelength and before she could think of anything he asked, “How long have you been living in this neighborhood?”

“About a year? Give or take?” Avery said.

His question stumped her. What could she say without seeming pitiful?

Avery was relieved when she spotting the front steps of the apartment and didn’t answer. Instead she turned around and looked up at him, dodging his question, and brightly said, “Here we are. Just leave the boxes on the steps and I will take them up. Thanks for all your help.”

James looked down into Avery’s big green eyes. “No way, lady. I was told to do a job and I don’t stop when it’s only half finished. Lead me to your apartment?” James’s stance seemed to say he would book no argument. His eyes, while still friendly, seemed to have a hint of blue steel in them. He wasn’t backing down.

Avery stood to her full height of five feet. Well, she wasn’t backing down either. “I can handle this myself. I’m used to doing things for myself. Please understand that I appreciate your help. But please don’t push me in this. I am not employed yet by your firm and don’t take orders well.”

James glared at her.  He knew that she would be walking up at least three flights of steps with boxes. Taking a cleansing breath, James knew when to back down. His kitten had claws and James, while he couldn’t wait for them to be sunk into his back with pleasure, knew this was not the time for the Dom in him to come out. He would negotiate this time. He wanted her to feel safe with him.

“OK. Let’s make a deal. I will take the boxes up to your third floor hallway and leave them there. I’m not leaving you to walk three flights back and forth with boxes.”

Avery sputtered. She wasn’t used to men being so forceful when it came to her well-being. She had learned from her short time on the streets that she needed to fend for herself, nobody cared if she needed help. Avery though for a minute. It would be nice not to have to go up and down the stairs. Glancing at the boxes in James hand, she knew it would take her a least three trips.

“OK, you win, but just up to the hallway. By the way how did you know that I lived on the third floor? I didn’t mention it to you.”

“Clay must have mentioned it when he asked me to pick up the boxes,” James lied as he stepped forward and opened the front door of the apartment for her.

Sliding around him, Avery tried making herself as small as she could. Trying not to touch James’s large body as she walked through the door was impossible. The door wasn’t the largest and James seemed to be taking up most of the space. Avery felt herself brush him. Her ass was just the right height to brush his crotch. If she didn’t know better, she would think he was packing, but she knew James was not hiding a gun. Well, at least she hoped not. But something sure felt big and solid. Was he hard? Or was this his at rest package? Avery gulped. Wow, he was big everywhere. Her other parts started to respond and Avery quickly ran up the first flight of steps not waiting for James.

Red-faced from her thoughts, Avery turned to James. “You coming?” Avery’s face turned even redder. “I mean we don’t have all night.” Her voice was abrupt and louder than she would like.

James just stood at the bottom of the stairs and grinned. He knew she had felt him when she brushed past. He had been hard since he had first seen her tonight. The damn thing never went down when she was around. With her red face, he knew she was having the same thoughts. With a knowing twinkle in his blue eyes, he followed Avery up the stairs.

Taking a stride to Avery’s side, he enveloped her in his arms. Her body melted into his at his first touch. Hell, tonight would have to be vanilla. He wanted her to want him, not be scared of him. Holding her close, James closed his eyes and just breathed in her scent. Her scent was unique. It had a musty underlay with a fresh lemon scent mixed in from her shampoo.

“Are you sniffing me?” Avery pulled away from his chest with a laugh.

“Just trying to get to know you on a cellular level, wanting to inhale all of you. Do you feel how much I want you?” James rubbed his hard as rock cock into her. She was so much smaller than him size wise, that he ended up rubbing his cock on her stomach.

Bending down, James’s hands lifted Avery up by her ass and he lined up his cock with her clit, grinding into it as he carried her over to the bed. Lying right on top of her, James slid his hands from her ass to cup her face so she couldn’t escape the hottest kiss she had ever had. Wiggling her hands from between them, she put her arms around his shoulders and dug her nails in. As his shirt started to rise, she helped it along, grasping as much as she could reach. She desperately wanted to get her hands on the warm skin beneath the shirt.

The feel of his body on top of hers was burning her up. James let her lips go, rose up, and finally pulled his shirt over his head. He wanted to feel her hard nipples poking into him without anything between them. God she was sweet. He had to have a taste. Not wanting to think she pulled his head back down to her lips. All she wanted was the large cock she could feel rolling over her folds, inside her.

James let his hand leave her face, drawing a line with his fingertips down and across the side of her breast to her leg. Gliding his hand down further to her knee, he felt the softest skin that he had ever had the privilege of feeling. Turning at her knee, he made his way back up to her core.

Avery could hardly breathe for James’s tongue stroking deep in her mouth. What little breath she had left was held in anticipation of his first touch. She arched and started to wiggle, not wanting to wait. Pulling away from his mouth, Avery moaned as James’s hands finally touched her folds with a hot steady hand.

He almost took his hand away at his first touch. She was so hot, she was burning him up. If she was burning his hand, he could just image what she would do to his cock when he finally sunk inside her. Rolling off Avery, he opened her legs more fully.

“God, baby, you’re so hot.” He took one finger and pushed into her. It was a struggle, and James asked her again about it being her first time.

“No, I’m not, but it’s been a long time. Stuff happens. Just kiss me.” Avery did not want to answer any questions and change the mood. Questions would be answered after.

James retook her lips and pushed his finger in and out a little at a time, until he was in her as far as he could reach. Avery’s cunt started to flutter around his finger and he knew she was close. Pulling his finger out, James broke their kiss and moved down between her legs, making room for his shoulders.

With his chest on the bed between her legs and feet hanging over, he finally opened her to his gaze. She was so wet his finger almost slipped as he opened her up to his glaze. James just stared. Her little clit was peeking out and her vagina was spasming. James reached his head down, and with his tongue, took a long swipe from her little rosebud up to her clit. He lifted his head and just breathed her in.

Avery was just getting ready to say something quirky, like “are you smelling me again?” when he put his head back down and went to work, making her crazy. With the first push of his tongue into her, Avery exploded. Her breath was gone. Her head was in the clouds.

James took advantage of her state and got off the bed and out of his trousers, kicking his shoes and socks off as fast as he could. Reaching into his pocket, he grabbed a condom and rolled it over the purple head of his cock. Just the pressure of the condom had him ready to explode.

Crawling back between her spread thighs, James rubbed his cock at her opening. Raising his head, he looked over her spent body up to her closed eyes. “Avery, look at me.” Avery came out of her fog to finally hear James speaking to her. “Look at me.”

Ten years ago, James Braden was the leader of an elite covert unit of men that was involuntarily discharged from the army after receiving faulty intelligence. At loose ends, the men pool their resources and start Braden Security.

James Braden is hired to get close to Avery Knotts. She is the only clue to $2 million worth of missing drugs. A known drug lord wants them back, the Feds want them off the streets. At first glance, James knows in his gut she is innocent and decides to claim her as his own. While keeping her out of danger and staying one step ahead of the drug lord’s henchmen, James becomes too intimately involved with Avery.

The other members of the firm step in to keep him on the straight and narrow as they try to ferret out the information. A charm bracelet gives them their first clue.

Can James protect and keep her safe from everyone, even himself? 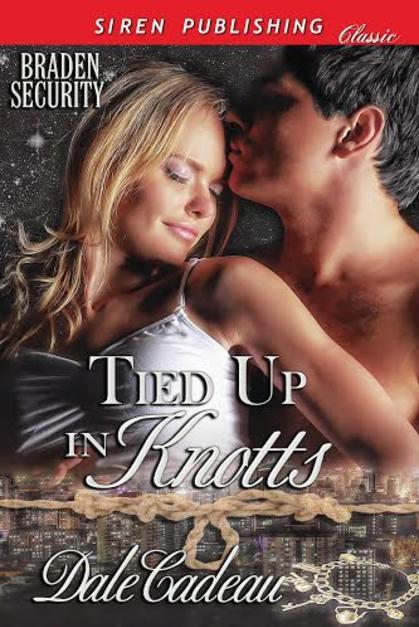 Tied Up in Knotts